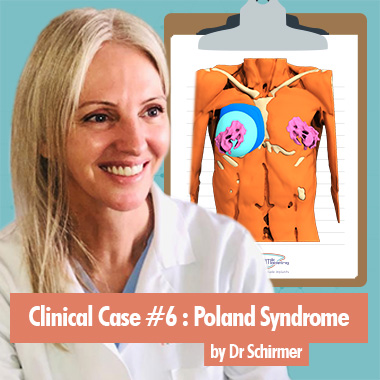 Diagnosis and correction of Poland Syndrome associated with a persistent breast asymmetry on a young woman:

First consultation - With a first surgeon

At the age of 15, the patient received two implants subcutaneously:

Two months later the subclavicular implant had to be removed due to complications. It had moved from its original position and had ruptured during the attempt of repositioning it. It had been removed through the same incision. The breast implant remained in place.

Due to the insufficient result of her first procedure, the patient saw Dr Schirmer at the age of 33. Clinical examination shows a persistence of the chest deformity due to the absence of pectoralis major muscle and a retractile shell deforming the breast implant. The scar is unsightly.

The surgery with custom-made implants

The patient chose a new surgery including two operating stages: 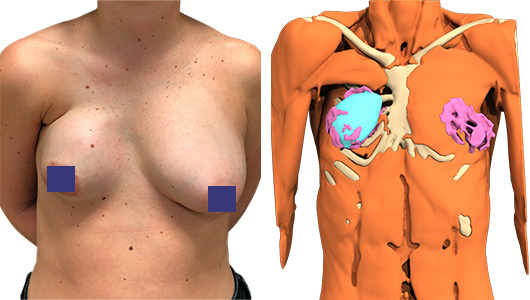 Three months after the consultation, the first re-intervention is performed under general anesthesia:

Simple and painless follow-up (paracetamol), no puncture necessary in the absence of post-operative sero-hematic collection.

The patient is discharged the following day.

Change of the breast implant through the axillary way: the capsular fibrous plane is respected behind to maintain a partition between the two implants and prevent slipping one over the other.

A new and larger compartment is created on the front for the new soft breast implant, filled with silicone gel. Remodeling of the tuberous and ptosis left breast with periareolar dermo-mastopexy.

Symmetrical repositioning of the areola of the right breast.

The immediate result is very satisfactory for the patient. Thoracic and breast symmetry is much improved. 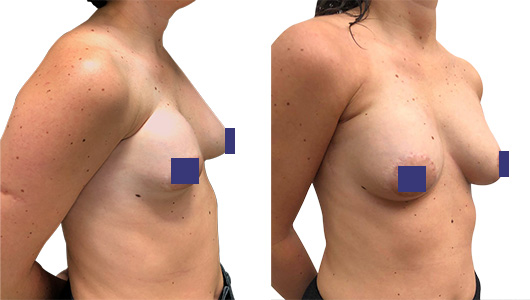 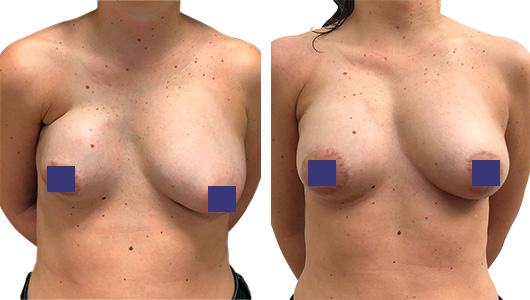 Dr Claudia Schirmer is a plastic, aesthetic and reconstructive surgeon as well as a pediatrician. She works at the Italian Hospital of Buenos Aires in Argentina. She is also a member of the Argentinian Society of Plastic Surgery.